The Gulf of Mexico
Hypoxic Zone 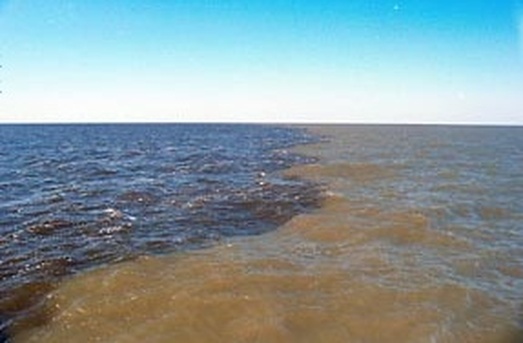 Where the Mississippi meets the Gulf: a clearly demarcated interface between the blue, oxygenated waters and the silt-and nutrient-laden Mississippi River. 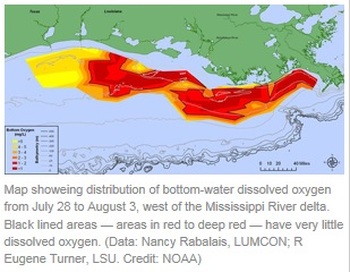 We Are One of the "I" States

Illinois isn't the only "I" state with nitrates making their way into drinking water and down the Mississippi to the Gulf of Mexico, but their experience can help us understand the problem and the solutions.

Don Roseboom of the Geological Survey; Marcia Willhite, the Illinois EPA Deputy Director; Jean Payne, the Illinois Fertilizer & Chemical Association President; and Dan Schaefer of the Illinois Council on Best Management Practices will discuss the problem of nitrate levels in Illinois waterways. A recent study of farm runoff in Bloomington revealed there was more nitrate content than expected in stream ways.  (November 2013)

Don Roseboom of the Geological Survey, University of Illinois Extension Director Doug Gucker, Dan Schaefer of the Illinois Council on Best Management Practices and Warrensburg, Illinois, farmers David and Chase Brown will discuss methods to reduce nitrate levels in waterways. A recent study of farm runoff in Bloomington revealed there was more nitrate content than expected in stream ways. Nitrates result from nutrients like nitrogen that farmers apply to crops. The panelists will look at ways to reduce nitrogen application to farm fields, including alternative farming techniques and the use of cover crops.

Soil Health's Effects
Beyond the Farm

The GRN advocates for reduction in the size of the Dead Zone through a number of strategies.

An introduction to the Gulf Restoration Network:

GRN (including Matt Rota, with whom we met in New Orleans in January), Iowa, and the Dead Zone:
Gulf Restoration Network

The Task Force includes federal and state agencies (including Bill Northey, Task Force Co-Chair) and the tribes. Federal agencies include those with responsibilities over activities in the Mississippi River and its basin, and in the Gulf of Mexico. The role of the Task Force is to provide executive level direction and support for coordinating the actions of participating organizations working on nutrient management within the Mississippi River/Gulf of Mexico Watershed. The Task Force has designated members of a Coordinating Committee, and solicits information from interested stakeholders.
MRGMWNTF
A classic example of why grassroots efforts to address issues like the hypoxic zone are so vital can be found in the article linked below.  Politics and action so often do not go hand in hand.

WWNO 89.9
﻿Farmers and Fisherman: No Gulf between Us, is ﻿a project Cedar Basin is developing to increase understanding on both ends of the Mississippi. The project will facilitate learning what's at stake for all involved, how we can work together to everyone's benefit, and what we can all do to alleviate the dead zone in the Gulf while continuing to provide a livelihood for our families and food for the world. (More information on the initiative can be found in our Winter 2015 newsletter.)
Newsletter
Dr. Nancy Rabalais, is a Marine Ecologist focused on hypoxic zones.  She received the MacArthur Fellowship in 2012.

When our soils aren't healthy, they can't hold nutrients, which then run off or leach into area waterways, eventually winding up in the Gulf of Mexico, where they lead to the formation of the hypoxic zone, which diminishes habitat, affecting fish reproduction. 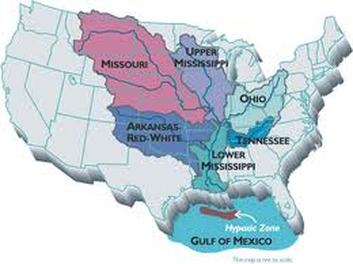 The vastly agricultural Mississippi drainage sends tons of nutrients down the river each year. 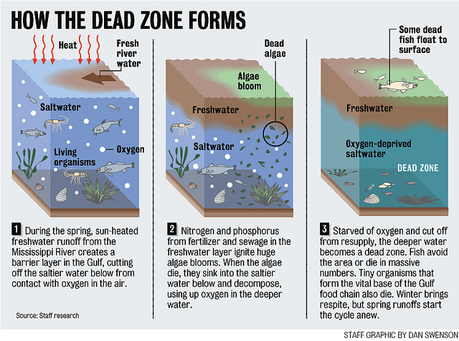 ﻿For a better understanding of the Gulf of Mexico's dead (or hypoxic) zone, click the link below.
Wikipedia dead zone
or watch the video below:
Corn Belt Pollution: Louisiana Shrimp and Oysters Pay the Price
And learn about Iowa's role in the health of the Gulf of Mexico here:
Iowa's Response to the Problem:
Read more on the strategy and related issues here:
Iowa Nutrient Reduction Strategy
Methods to Help Iowa Achieve Success with the Strategy